Is This The Most Accurate M&P Ever? [Video] 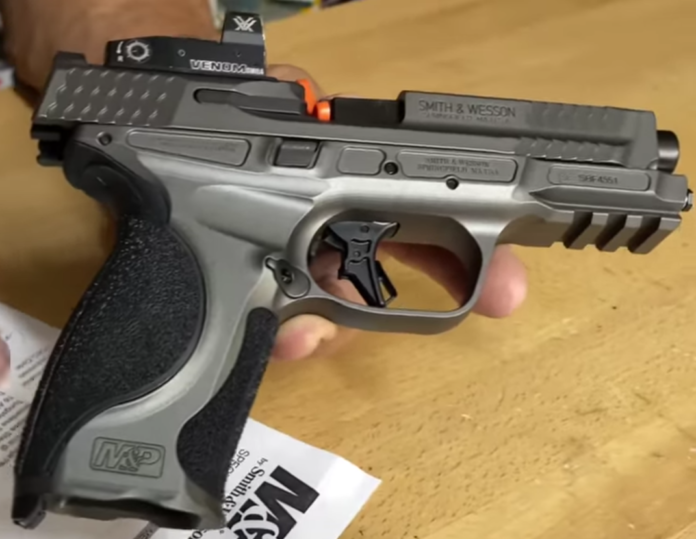 Smith & Wesson is easily one of the most recognizable names in firearms, and their M&P9 series of pistols is one of the most popular lines in the pistol market today with several different models in that line available at any given time.

Still, even with the popularity of the current models, there is always a variation that someone in the market is looking for. Maybe your preference is to have the slide cut for optics. Maybe you want a large ammunition capacity for the size of the gun. The M&P9 line has those options covered and more.

What the M&P9 line didn’t cover previously, though, is a throwback to an older style of pistol: a metal-framed pistol. Duncan Johnson gives us some of the details of a new M&P9 model that gives you that option, now:

Built with a T6 Aluminum frame, this pistol includes a 4.25-inch barrel, M2.0 flat face trigger, two 17-round magazines and is slide cut for optics. Its Tungsten Gray Cerakote® presents a unique aesthetic, which makes this M&P stand out from the rest. The M&P9 M2.0 METAL fits any M&P9 compatible holster and accepts any M2.0 17-round 9mm magazine.

Now, having said that, beyond just the preference some people have for having a metal-framed pistol instead of something with a polymer frame, why should you care about the metal frame?

Great question. One answer is something that you may not have considered, and that is the weight of the pistol. Shooter Jerry Miculek notes that this pistol is about 6 ounces heavier than other M&P9 models.

Why would you care about weight? Simply this: the more mass in the pistol (which you can feel by the pistol’s weight), the less felt recoil when firing that pistol because the extra mass of the pistol absorbs more of that recoil than a polymer pistol will.

That means getting back on target that much quicker after each shot.

That may be why Miculek said in a recent video that the M&P9 2.0 METAL is “By far the most accurate M&P out of the box I’ve ever fired.” You can hear that quote at the beginning of his video below.

So, if you love Smith & Wesson’s M&P9 series, but hate polymer pistols (or simply prefer a metal-framed pistol), the M&P9 2.0 METAL may be one for you to consider.